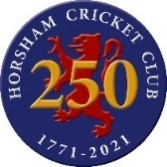 Dear Members
The 2022 season has come to an end and in our last newsletter of the year we will bring you up to date with team results and individual awards.
Seniors – Men
The 1st XI had a great start to life back in the Sussex Premier League and were challenging for a top spot from the word go.   In the end they finished a very creditable third and the strength of the team bodes well for next season.  The 2nd XI were outstanding throughout the season and were worthy winners of Division 5.   Promotion to Division 4 will be a good test of the strength of the side.   Due to player unavailability at the beginning of the season, the 3rd XI got off to a slow start but performed well in the second half of their league programme to finish fifth.
A great effort by all and a special thank you to the Captains and Cricket Manager – Nick Oxley, Harry Haines, Harry Magnus and Ben Williams – for all the efforts they put in both on and off the park.   A big thank you also to all the umpires and scorers who gave of their time, we can’t do this without you.

Thank you to Will Beer, Mark Nash and Andy Beer, our senior coaches, for all their efforts.   No Club can progress without having the right facilities to play on and HCC has a fantastic ground team.    Alex, Richard, Lol, John, Colin, Paul and Geoff have all put in an amazing amount of effort to produce excellent playing and practise facilities week after week.
We send extra special thanks to Richard for all he has done both this year and for the last 60 plus years in so many different roles at the club.   He is not in the greatest of health at the moment and we are all looking forward to seeing him back here soon and send our best wishes.

Seniors – Women
Our Women had a challenging season with injuries and availability issues and oppositions cancelling matches but are looking forward to better fortunes in 2023. The future is bright with so many girls in the junior teams who have played extremely well this year and with the U13’s winning both their league and the SJCF cup

Juniors
The Club’s Junior Awards Day took place on 11th September when our junior girls and boys spent the morning playing cricket together at our beautiful ground for the final time this year. The matches were then followed by presentations of the awards to individual winners, hosted by Mark Nash and presented by Sussex CCC player Tom Clark, a junior himself here at Horsham from the age of 4. Well done to all who received an award and to everyone who trained and played this year   Cricket is a team sport and everyone’s contribution is valuable. A very big thank you to all the coaches and team managers who give their time so generously in order that our juniors can play so much cricket. 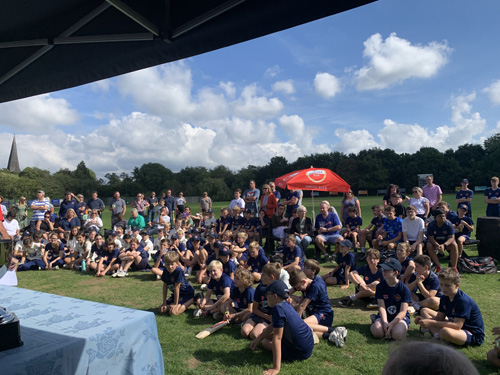 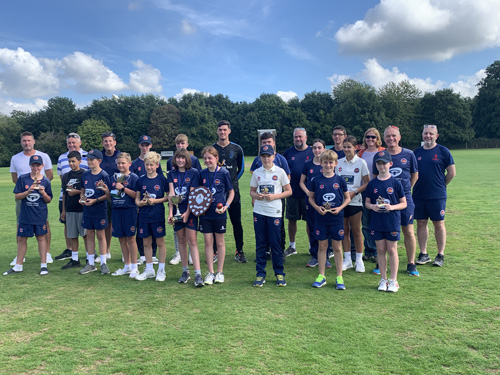 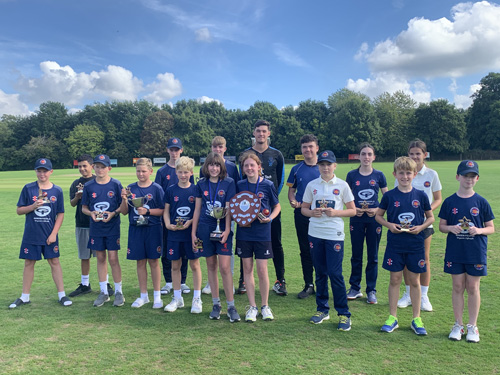 The Gerrard/Bartlett Award.   Following the untimely loss of Adam Gerrard, a stalwart of the Club for so many years and especially junior cricket, it was proposed that an award be given in his memory.   Kevin Bartlett suggested that the criteria for this award should be “The AG trophy is awarded to the Horsham CC junior cricketer who has played with passion, enthusiasm, commitment and in accordance with the spirit of the game, and has gone out of their way to encourage teammates and club mates to do likewise”.  Little did we know that very sadly we would now also be paying tribute to Kevin and that his words would actually be used for the Gerrard Bartlett Trophy.  We are so grateful for all that these two did for junior cricket and are proud to present an award in their memory.   The first winner of the award is Eliza Harris.
Many volunteers give of their time during the season to help in the running the Club in a smooth and efficient manner.   Without those volunteers, including those on the Cricket Committee, the Sports Club Committee and in the Club Office, the Club wouldn’t function.   Much of their efforts go unnoticed, so now would be a good time for the Club, especially the players, to thank them for all they do.

Other News
Winter nets are booked at Christs Hospital for juniors and seniors, we will let you know dates and times once confirmed.
Squash Coaching – for those who would like a new way to keep active during the winter, why not try squash? – we have 3 courts here and also offer coaching – click here for more details.
Memorial Bench.
You may have seen the new bench dedicated to Adam Gerrard on the terrace and this was kindly donated by members of the Sports Club.  We would like to buy another bench, in Kevin’s memory, to sit alongside it.  If anyone would like to make a donation towards this, please contact the club office.

Finally we would like to thank our generous sponsors for their continued support- don’t forget that members receive discount from them all.
Horsham Cricket Club sponsored by